Fall Play: We Tell Our Stories
Spring Musical:
Once On this island

The Haunted Auditorium will be adapted this year: See above...
Come Visit Molly 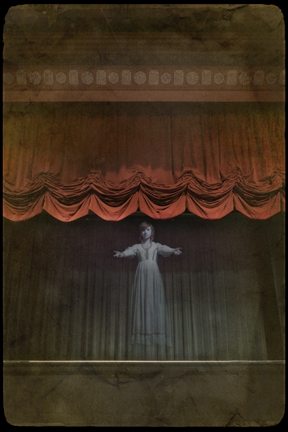 The Legend of Molly:
It is believed that Molly was a Godby High School student about 24 years ago who was murdered on campus.  She was stabbed at the Halloween Homecoming Masquerade in the 100 building hallway, just outside of room 109 which was the drama room at the time and just this year has been returned to the drama classroom.  Her boyfriend supposedly killed her because he caught her cheating on him.  She crawled back to the auditorium and died on the stage, which was appropriate for her as she was a drama student who wanted to major in acting.   Godby ended it’s drama program after her death.  It wasn’t until Ms. Lundgren came to Godby in the fall of 2008 and revived the program that Molly started making her appearances.  Because she loved drama so much, in the afterlife, she still finds little ways to make her presence known: turning T.V.’s on and off, opening and closing doors, moving things you set down, preventing doors from unlocking until you say please.  She is not a malicious ghost, just mischievous.  The drama club memorializes her in their haunted house every year to pay respect to her.  She has been known to show up in the haunted house from time to time in a glimpse of her in the mirror, or out of the corner of your eye.  But most of the time, she just watches and wishes she were back on our stage performing.  This year it is actually on the anniversary of her death, so she is likely to make an appearance.